Joure originated on top of a sand ridge on a crossing of waterways next to the former village of Westermeer. The place is not traditionally a city, but also too big to be called a village. According to Old Frisian tradition such a place is called a vlecke.

About the origin of the name Joure, or De Jouwer are different theories. It is often thought that it comes from the Frisian word Hjouwer, which means oats.

The name of Joure is inseparable from that of Douwe Egberts. In 1753, the father of Douwe Egberts, Egbert Douwes, started a business in Colonial merchandise at the Midstraat in Joure, which has become the famous coffee roaster.

Until the municipal redivision in 1984, Joure was part of the former municipality of Haskerland, of which it was the main town. 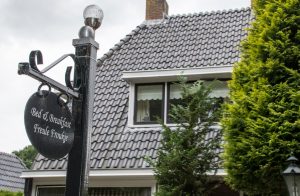